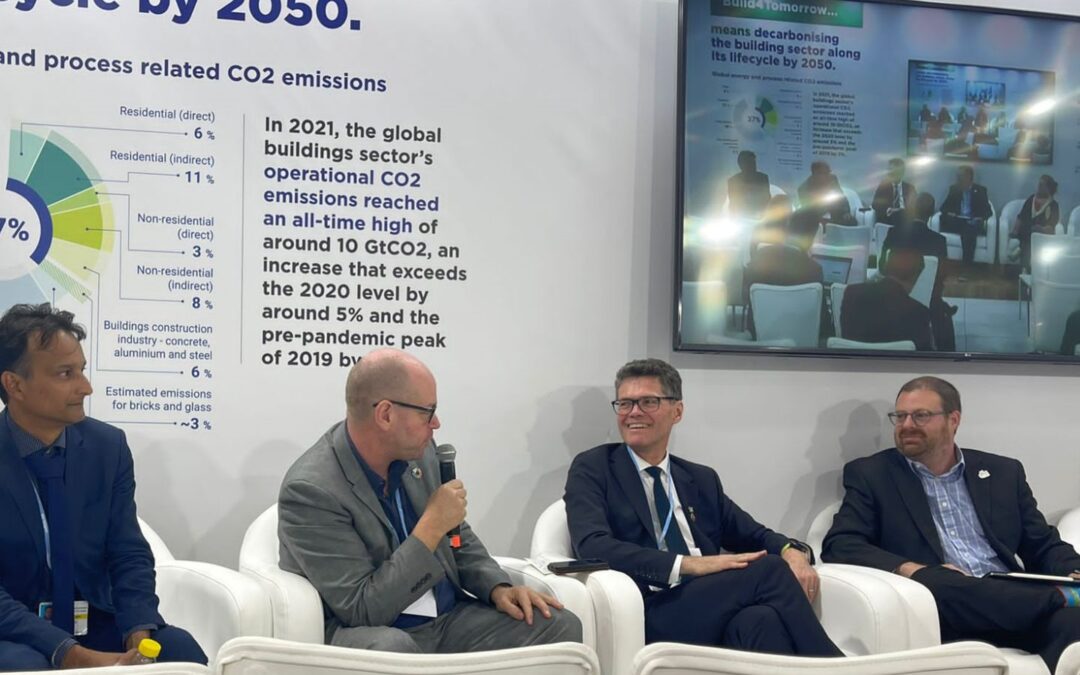 Industry experts came together at COP27 to address how we use data, standards, policies and other tools to support a lifecycle approach to greenhouse gas emissions in buildings.

Following the recent release of the Global Status Report for Buildings and Construction, which tracks the sector’s progress towards Paris Agreement goals, the industry is facing up to the scale of the challenge. The report, prepared by UNEP and Global Alliance of Buildings and Construction, confirmed that building-related emissions are not yet dropping and even experienced a post-COVID rise. But there were some positive trends in building policy and investment.

Moderating the session, Robert Spencer, the Aecom global lead on ESG advisory services, encouraged the assembled experts to see the scale of the challenge as exactly why they were coming together. It was their role, he said, to show pathways to progress on data, standards, policies and tools to support a full life cycle approach to decarbonising buildings. He also lead with a strident call for harmonisation and standardisation in the implementation of net zero emissions buildings.

Idriss Kathrada, founder and director of Inoal shared his in depth knowledge of lifecycle analysis and greenhouse gas emissions scenarios across the built environment to provide a landscape review of the current policy and standards mix, including ISO21931, EPBD, RE2020 and Passiv Hauss. Idriss had convened this meeting in Egypt to harness industry expertise to support implementation of climate action

Victoria Burrows, director, advancing net zero at the World Green Building Council (WGBC), reported that progress had been made within cities and spoke of the power of private sector and city authorities to be pathfinders and set value chain standards for the whole sector to follow. She particularly highlighted the great strides that emerging economies like South Africa are making, and their ability to leapfrog outdated standards and practices.

Asked what the most significant initiative for the sector to get behind would be, Burrows had no doubt it was the 2030 Breakthrough initiative, which aims for all new projects in the built environment completed from 2030 to be net zero in operation and to have had their embodied carbon reduced by over 40%.

Nigel Tonks, sustainable development board director at ARUP, and climate champions team senior adviser, offered a corporate perspective on carbon data. Arup had spent the last year following up on their commitment at COP26 to provide a full life cycle carbon reduction approach for buildings, which they call ‘Zero’.

Arup’s calculator works across the lifetime of a building, estimated at 60 years, and engaged over 1,000 staff across 30 countries. Tonks explained that they had developed standard carbon calculating approaches and KPIs for a variety of building typologies across a climate and country energy mix, with building emissions ranging from 600kg/m2 to over a 1,000kg/m2 over that 60-year whole life estimate.

Tonks noted that their ‘handprint’ – the emissions impact of their designs – is 350 times greater than their carbon footprint and corporate emissions and he highlighted that the whole consulting sector will make the most impact by addressing and reducing designed in emissions.

Ryan Colker, vice president, innovation at the International Code Council, highlighted and discussed the significant volume of standards and guidance – both voluntary and mandatory – already available on operational emissions. He then called for a new drive to harmonise on embodied carbon, emphasising the joint ICC/ ASHRAE standard on evaluating GHG and carbon emissions in building design, construction and operation.

Harpa Birgisdottir, Professor of sustainable buildings research at Aalborg University highlighted the very significant steps being taken in Denmark to codify and cap carbon emissions for different building types under a new regime being rolled out.

Professdort Birgistottir highlighted the move to 10kg of CO2e / m2 per year across a building lifecycle, though this served to highlight a real challenge in harmonising data. Nigel Tonks had been talking in his section about emissions per m2 over a 60-year lifecycle, whereas Harpa was providing a per year figure – which served as a microcosm of some of the confusion out there on where to set boundaries and how to compare like with like across the infrastructure industry as it strives to cut emissions out of the design process.

Speaking from the floor, Kirils Holstov of AECOM and WFEO then suggested that future standards must include both emissions mitigation and adaptation and resilience measures if we are to create a built environment legacy that can withstand the coming frequency and intensity of climate related events.

Cause for optimism
Despite the discouraging news from Global Status Report, Robert Spencer told IG that the session ended on an optimistic note that with leadership from the private sector and initiatives like the 2030 Breakthrough, together with leading country examples such as Denmark, industry already has the tools, approaches and policies to achieve very significant building decarbonisation by 2030. He said reported that the work ahead will be about scaling, promoting, education and building up capacity of these tools, standards and approaches that already exist, and rapidly increasing access and understanding of them across the engineering and construction professions.

The industry discussion was convened by Idriss Kathrada, founder of Inoal and a member of the FIDIC Sustainable Development Committee.